Based on preliminary reports, six people were killed in Harrisburg (southeastern Illinois), when a tornado struck late last night. The NWS is surveying the damage today. I will post more information when it becomes available.

Update 8:30 am, March 1. The Paducah NWS office has released a preliminary report on the tornado outbreak in southern Illinois, Indiana, and Kentucky.

Update 3:45 pm, February 29. According to a news conference aired on WSIL-TV, the NWS has identified this as an EF-4 tornado with wind speeds up to 170 mph. Wind speeds are estimated from the level of devastation at the scene in Harrisburg. EF-4 tornadoes are relatively rare in Illinois. Out of  2322 tornadoes reported in Illinois between 1950 and 2011, only 40 were in this category. However, they are very deadly. Of the 203 deaths related from tornadoes between 1950-2011, 100 of these came from EF-4 tornadoes. That is 49 percent of the data with an average rate of 2.5 deaths per EF-4 event.

Tornadoes are more common in spring and summer, but they can occur in February. A total of  39 tornadoes occurred in February from 1950 to 2011, causing 6 deaths and 28 serious injuries. We have a complete analysis of Illinois tornadoes here, including plots and maps. As the map below shows, many of our February tornadoes occur in the southern part of the state.

The NWS Climate Prediction Center has released the new outlooks for March as well as March-May.

One of the key things to come into play is the status of La Niña in the Pacific Ocean. A La Niña event occurs when ocean temperatures are colder-than-normal along the eastern part of the Pacific Ocean basin. The associated ocean and atmospheric pattern tends to give us a wet spring in states along the Ohio River Valley. CPC states that “La Niña is likely to transition to ENSO-neutral conditions during March-May 2012.” That’s government-talk for saying that the La Niña event is fading fast and will be gone before the end of spring.

The new outlook for June-August (maps below), the heart of the growing season, is for an increased chance of above-normal temperatures in southern Illinois and “equal chances” for the rest of the state. The entire state is in “equal chances” with respect to precipitation.

Just a note on “equal chances”. That’s the NWS way of saying that none of their forecasting techniques are indicating a higher risk of unusual temperature or precipitation patterns.

The statewide average precipitation was 0.66 inches, about 86 percent of normal (first map). It has a quiet month for snowfall as well with most areas reporting 2 inches or less (second map). That’s about ten times less than the first 14 days of last February (last map). 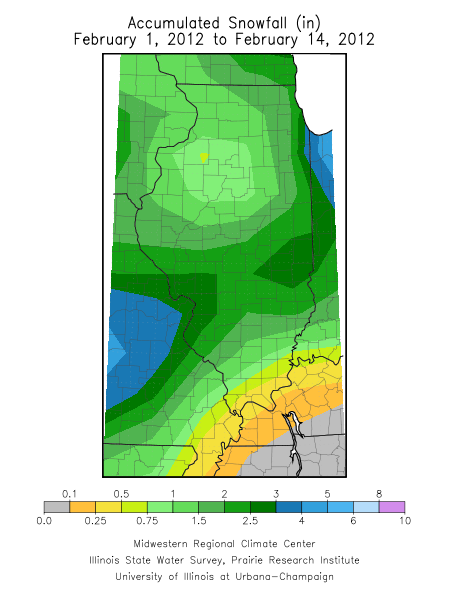 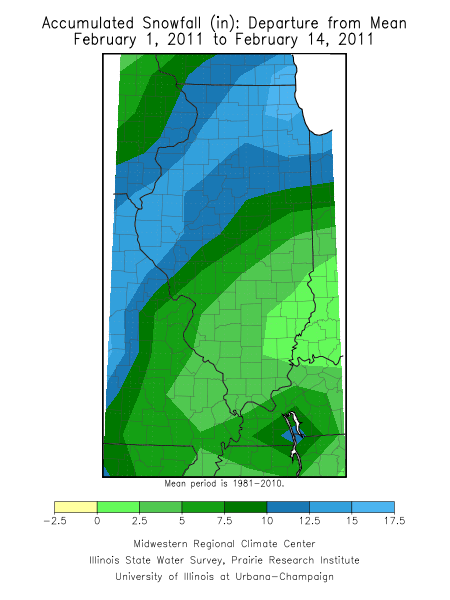 In a news release yesterday, we reported that this December/January was the 6th warmest on record. Here are the other years in the top ten list. The list includes the average temperature of the two months combined and the year for January.

Remember last winter, the evil twin of this winter? The average temperature of that December/January was 23.2° F. That is 10.2° colder than this winter and was the 10th coldest on record.