Here are the low temperatures reported this morning across Illinois from the National Weather Service office in Lincoln. A few areas in western and far southern Illinois escaped freezing temperatures but not the rest of the state. So that means the 2013 growing season has officially ended in many places. Unprotected annuals are probably done and the perennials will start to close up shop soon.

And now there are reports of snow across northern Illinois, including at the airports at Moline, De Kalb, Rockford and O’Hare.  You can see pictures on the Facebook page for NWS Chicago. [I forgot to mention that soil temperatures around the state are still quite warm, generally in the 50s, so the snow is not expected to last long – see the second map with 4 inch soil temperatures under grass].

I just wanted to share a picture of the Great Lakes, taken from space by astronaut Karen Nyberg on the International Space Station.  She was facing west when she took the shot so Lake Michigan is farthest away. On the lower left are Lakes Erie and Ontario and front and center are Lake Huron and Georgian Bay. Lake Superior was being camera-shy that day and was out of the frame. These five lakes constitute 21 percent of the world’s freshwater supply. Cumulus clouds dot the landscape.

The NWS Climate Prediction Center just released their outlook for the month of November and the 3-month outlook for November to January and beyond. There is nothing exciting to report for Illinois. We are in the “E.C.” region for equal chances of above, below, and near-average conditions for both temperature and precipitation in November. There is an increased chance of above-average temperatures in the November-January time frame.

Here is what they say in their forecast discussion. On a side note, the NWS text products are sent in all caps, a carryover from the teletype days. It’s quaint and annoying. ENSO refers to the El Nino-Southern Oscillation.

THERE ARE ONLY VERY WEAK INDICATIONS FOR CLIMATIC ANOMALIES FOR THIS NOVEMBER. THE HISTORICAL SKILL OF TOOLS IS QUITE LOW IN THE LATE FALL, ESPECIALLY SO DURING ENSO NEUTRAL CONDITIONS. THE STATE OF SOIL MOISTURE HAS LITTLE IMPACT ON TEMPERATURES OR PRECIPITATION WHEN SUN ANGLES ARE LOW, AND HENCE DOES NOT PLAY A ROLE IN THIS FORECAST. THIS FORECAST IS PRIMARILY BASED ON PROBABILISTIC FORECASTS FROM THE NMME AND IMME WITH SOME ADDITIONAL CONSIDERATIONS TO LONG TERM TEMPERATURE TRENDS.

The NMME and IMME are two sets of model ensembles. NMME stands for the National Multi-Modal Ensemble forecast and is based on 5-7 models. I have used their results in the past with caution. Right now they are one of the few viable forecasts in town, because the current ENSO-neutral conditions in the Pacific makes it impossible to use any kind of statistical forecast based on El Niño or La Niña events.

I love all four seasons in Illinois but I especially like fall. In fact, you could say I’m a falloholic. What’s not to like – the air is cool and crisp and the cloud formations are spectacular. One of the best things about fall is the changing color in the trees, shrubs, and grass.

A great website for all things related to fall color is the University of Illinois Extension site called “The Miracle of Fall“. Check it out for fall color, foliage updates, photos, festivals, etc. You can also find out about fall activities in Illinois at the Office of Tourism site “EnjoyIllinois.com“. A few other sites to explore are:

One of things I get asked every year at this time is, “what is the effect of weather on this year’s fall color?” It’s hard to answer…

Here are the monthly precipitation and temperatures for 2013 in Illinois through September, expressed as departures from the 1981-2010 average. Regarding precipitation, we had a very wet start to 2013 through June, the wettest first half of a year on record, which then turned into a dry July-September. The year to date precipitation totals stands at 35.58 inches, which is 4.85 inches above average.

Regarding temperatures, January was very mild while March was much colder than average. We had slightly cooler than average temperatures in the summer months of June, July, and August, followed by a September that was on the warm side. The year to date temperature stands at 54.6 degrees, which is 0.9 degrees below average. 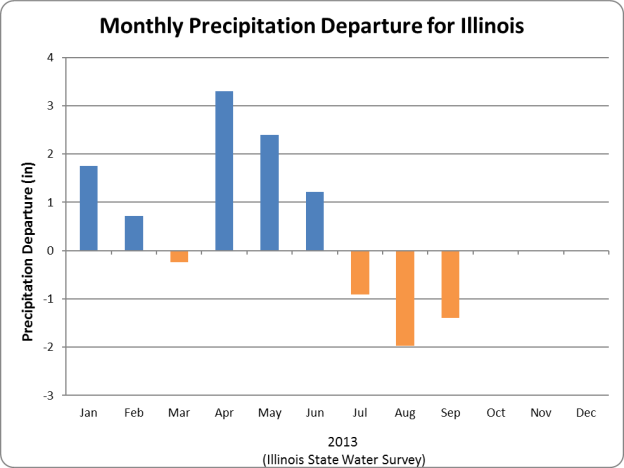