Based on the data so far, December has been colder and drier than average. The statewide temperature is a chilly 25.1 degrees and about 7 degrees below average.

So far, snowfall has been above-average for the first 18 days of December in Illinois. Snowfall amounts of 5 to 14 inches are common across Illinois (second map) with the largest snowfall departures of 8 to 12 inches in southern Illinois (third map). Some of the most impressive snowfall totals include 14.5 inches at Fairfield, 14.4 inches in Waltonville, and 13.5 inches in St. Francesville.

The upcoming winter storm is expected to bring significant amounts of rain, freezing rain, and/or snow, depending on where you are located. Keep close tabs on the weather forecast as this system develops.

There can be large differences between nearby sites. Snowfall is notoriously difficult to measure with the potential for two nearby sites having different results due to exposure to the sun and the wind.

Because of our pattern of cold and snowy conditions in December so far, and the NWS forecast for colder and wetter than average conditions through at least December 26, I would say the odds of seeing a white Christmas are probably much higher this year!

On the national map below, you can see what the historical odds of a white Christmas are across the US. Personally, I have mixed emotions about a white Christmas. Yes, it is nostalgic, especially if you grew up in the Midwest like me. And the decorated houses look spectacular with snow on the ground instead of brown grass. But it does complicate travel plans.

Southern Illinois experienced freezing rain, sleet, and snow on December 6-7, 2013.  Here are some maps showing snowfall totals – both from the NWS. For some locations, this winter storm produced a season’s worth of snowfall in the course of a few days. The largest snowfall total I have seen so far is 13.0 inches at Waltonville, IL (Jefferson County). Other heavy snowfall totals include 12.6 inches at Chester, and 11.5 inches at Lawrenceville and St. Francisville.

Between the November 17 tornado outbreak and the Thanksgiving holiday, I did not post this earlier – NOAA released their winter forecast on November 21. For Illinois, there are equal chances (EC) of above, below, and near-normal temperature and precipitation. What does that mean? It means they found no strong evidence of unusually cold/warm/wet/dry conditions this winter in Illinois.

Part of the reason for this not-so-exciting winter forecast is that we have neither El Niño (warm water) nor La Niña (cold water) patterns occurring in the Pacific Ocean. Instead we have the “neutral phase” where sea surface temperatures in the Pacific Ocean along the equator are close to the long-term average. The Climate Prediction Center expects us to be in the neutral phase of the pattern through at least spring of 2014.

There has been some research on what happens in winter during the so-called “neutral phase”. The map below is based on a scientific paper by Wayne Higgins and others in 2002. They found that there is a tendency for the jet stream to stay south of Illinois, leaving us in colder-than-average conditions. It is interesting that this pattern fits the temperature forecast for the central US over the next 14 days.

If only forecasting winter weather was as easy as tracking the conditions in the Pacific. Other forces may come into play including the Arctic Oscillation and the related North Atlantic Oscillation. And don’t forget the natural variability of winter that we love so much – warm one day, freezing the next, little snow for a month followed by one big storm. If you have lived in the Midwest for any length of time, then you know the drill. Stay warm and safe.

November 2013 will always be remembered for the tornado outbreak on November 17, 2013, that produced 25 tornadoes across Illinois based on the latest reports. Much has been written on that subject in this blog and elsewhere. While not as dramatic, November 2013 in Illinois was colder and drier than average.

Snowfall was common in the northern half of the state in November. Snowfall amounts were heaviest in the northwest corner of the state and in the range of 4.0 to 4.6 inches in the Galena area.

The statewide temperature for November was 38.3 degrees, 4.2 degrees below average. While cold, it was far from the coldest November on record. That record stands at 33.6 degrees in 1976. Many places in Illinois experienced both spring-time temperatures and winter chill in November.

The warmest day of the month was November 17 as warm, moist air moved in from the south ahead of a strong cold front. This warm, moist air helped fuel the tornado outbreak. Just a week later low temperatures dropped down into the teens. For example, Chicago O’Hare Airport reported a high of 69 degrees on November 17 and a low of 11 degrees on November 24. That is a 58-degree change in temperature in 7 days.

Note: the word average used in the text and the word normal used in one of the maps below refers to the 1981-2010 average. 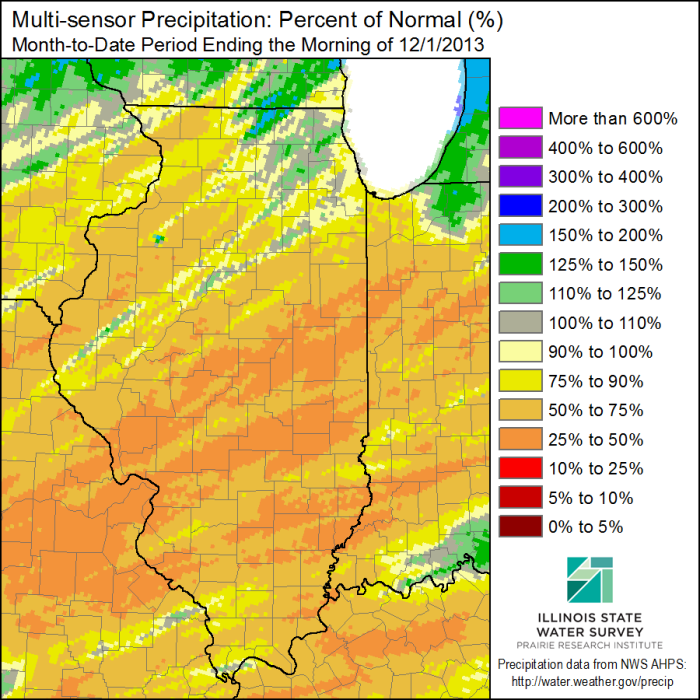