The statewide average temperature for Illinois from April 1-11 was 35.6 degrees, 12 degrees below normal. While we are having a few days of warm weather now, we are expected to get right back into colder weather over the weekend. The NWS forecast for the next 14 days shows an overall picture of below-normal temperatures. Even so, I expect the departures from normal won’t be quite as severe as the first 10 days of April.

If you are thinking that you have never seen an April this cold, you are probably right. Here are the top ten coldest Aprils in Illinois. You have to go back to 1983 and 1982 for some really cold Aprils.

END_OF_DOCUMENT_TOKEN_TO_BE_REPLACED

Update 4/10/2018 – we have fixed the update issue. The observations can be found at https://www.isws.illinois.edu/statecli/cuweather/index.htm  I have seen instances where you have to clear your browser cache to force a reload with the updated observations. I apologize for the confusion.

Note: The web address of the State Climatologist website has changed to https://www.isws.illinois.edu/statecli/  Please update your links to reflect this. Some links are still being fixed. I apologize for the confusion – I just learned about this myself on Friday afternoon.

February-March: The statewide average precipitation for the February-March period was 8.69 inches and the 4th wettest February-March on record. The wettest was 1898 at 8.96 inches. So we didn’t miss the record by too much. Here are the maps for the accumulated precipitation and departures from normal for February-March (click to enlarge). Precipitation is a measure of both the rainfall and the water content of any snow. These numbers are preliminary and subject to change.

March Temperature: The statewide average precipitation for March was 4.03 inches, 1.07 inches above normal. The largest monthly precipitation total was 8.38 inches at Carlyle, IL. Here are the maps of accumulated precipitation and departures from normal for the month of March.

March Snowfall: The snowfall pattern for March was largely the result of one storm on March 24-25 that extended from the Quad Cities to Danville. The largest monthly snowfall total for March was 11.4 inches at Eureka, IL. The rest of the state saw little snow in March.

So, what’s the outlook for April? According to the National Weather Service, more of the same – an increased chance of below normal temperatures and above normal precipitation for Illinois and the Midwest. Maps below.

The April Fool’s Day/Easter Snow Storm of 2018 stretched across the central US. The bad news is that some areas saw 3 to 6 inches of snow or more. The good news is that the warm ground, warm air, and sunshine today quickly took care of it. The highest total I saw was Augusta, IL (Hancock County) with 9.0 inches.

In addition, we had cold temperatures over the snowpack. The lowest reading was -2 at Paxton. 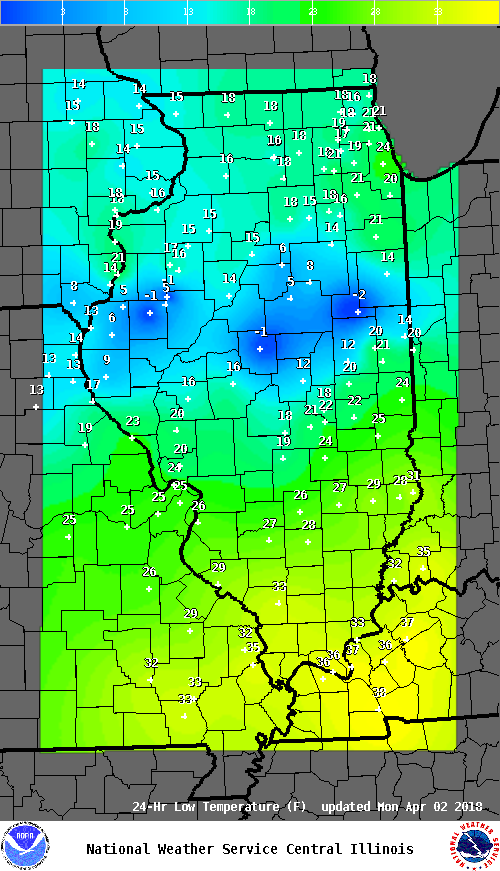