When I give talks on climate and climate change, I often get questions about volcanoes and their impact on our climate. The Washington Post had a recent article on the subject, mentioning the famous eruption of Tambora in 1815, which in 1816 led to the year without a summer in the eastern US. It probably had impacts on Illinois but we had no widespread observations in place at the time.

The one I remember the best was Mount Pinatubo. The following summer after that eruption was exceptionally cool across the US and around the world.

END_OF_DOCUMENT_TOKEN_TO_BE_REPLACED

Climate.gov just posted an interesting video on Charles David Keeling and his ground-breaking measurements of CO2 levels in the atmosphere. The observatory was located on Mauna Loa, on top of the second highest peak in the Hawaiian Islands.

The idea behind the site was to keep it far removed from any nearby sources of CO2 resulting from human activity. Because of it’s location and longevity, it is our best measurement of the background CO2 levels in the lower atmosphere. Here is the link to the Mauna Loa Observatory records and trends.

Dr. Keeling received his undergraduate degree here at the University of Illinois in 1948 and his Ph.D. in Chemistry at Northwestern in 1954. There is a brief bio here.

Here are maps showing how April so far has been warmer and wetter than average across Illinois and the Midwest.

Right now, most of the eastern two-thirds of the United States have experienced above-average temperatures for April (first map). The Midwest has been 1 to 6 degrees above-average, depending on the shade of orange (second map). Click on any map to enlarge.

END_OF_DOCUMENT_TOKEN_TO_BE_REPLACED

The NOAA Climate Prediction Center has released their monthly and seasonal outlooks for the growing season.

There is not a lot to report for Illinois at the medium range. We are in equal chances (EC) for above-, below-, and near-average temperature and precipitation for both May and the 3-month period of May-July.

END_OF_DOCUMENT_TOKEN_TO_BE_REPLACED

According to the National Weather Service report on the April 9, 2015, tornadoes, the tornado that tracked through Fairdale was rated EF-4 on the Enhanced Fujita scale. This would be the first EF-4 tornado in April since 1981 for Illinois and only the 33rd in Illinois history, regardless of month, since reliable records began in 1950.

Here are all the F/EF-4 tracks for Illinois from 1950-2014, from the MRCC tornado tracker tool. Unfortunately, we cannot screen out just the April events at this time. While this is a screenshot of the tool, the actual tool allows you to zoom in and out. If you point to a track then you get a pop up window with the details of that track. Check out the tornado tracker tool – it’s free. 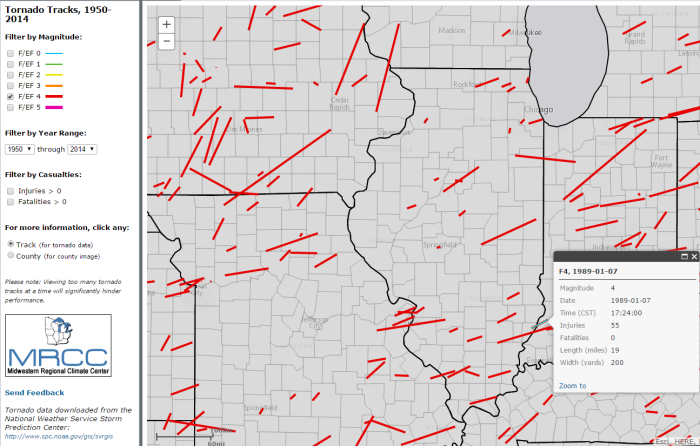 Today is the 62nd anniversary of the first documented case of a tornado detected by radar. Illinois State Water Survey staff, at Willard Airport in Champaign, IL, captured the historic event on film on April 9, 1953. This discovery helped lead to the first national weather radar network in the United States.

END_OF_DOCUMENT_TOKEN_TO_BE_REPLACED

Here is a shot of the hail dents on our hailpad at the Illinois State Water Survey in Champaign from this morning’s storm. Most of the dents where in the 1/4 to 1/2 inch range.

To construct a hailpad, we use sections of flourist or floral foam covered with aluminum foil. It is low tech but an excellent way to record hail sizes and density, especially when no one is around.