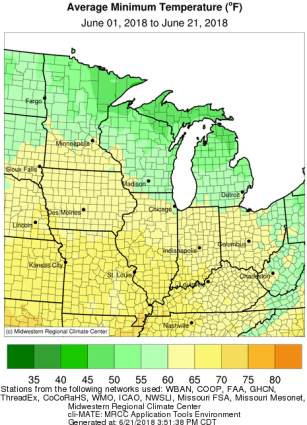 Precipitation: Precipitation was highly variable across Illinois, which is fairly typical for summer months (below). There are a few areas in pink with 10 to 15 inches. Areas in shades of orange and red have precipitation amounts of 4 to 10 inches, well above normal. The largest monthly total so far is Beecher City (Effingham County) with 11.22 inches. Meanwhile, rainfall has been less plentiful in western and southern Illinois with amounts of 2 inches or less. END_OF_DOCUMENT_TOKEN_TO_BE_REPLACED

Temperatures: Based on preliminary data, the statewide average temperature for May in Illinois was 70.6 degrees, 7.9 degrees above normal and the warmest May on record. The old record was 69.4 degrees set back in 1962. A brief examination of daily records indicates that Springfield, Champaign, Quincy, and Carbondale all had daily mean temperatures at or above normal for each day of the month. On the other hand, Chicago, Rockford, and Peoria had a few dips into the below-normal territory but overall finished above-normal for the month. Here is the graph of daily mean temperature departures from normal for Champaign-Urbana.