Temperatures: Based on preliminary data, the statewide average temperature for May in Illinois was 70.6 degrees, 7.9 degrees above normal and the warmest May on record. The old record was 69.4 degrees set back in 1962. A brief examination of daily records indicates that Springfield, Champaign, Quincy, and Carbondale all had daily mean temperatures at or above normal for each day of the month. On the other hand, Chicago, Rockford, and Peoria had a few dips into the below-normal territory but overall finished above-normal for the month. Here is the graph of daily mean temperature departures from normal for Champaign-Urbana.

“Normal” refers to the standard 1981-2010 average. For daily normals, additional smoothing is done since even a 30-year average can have some variability from one day to the next.

It was not just warm in Illinois. Here are the temperature departures from normal across the US for the month of May. 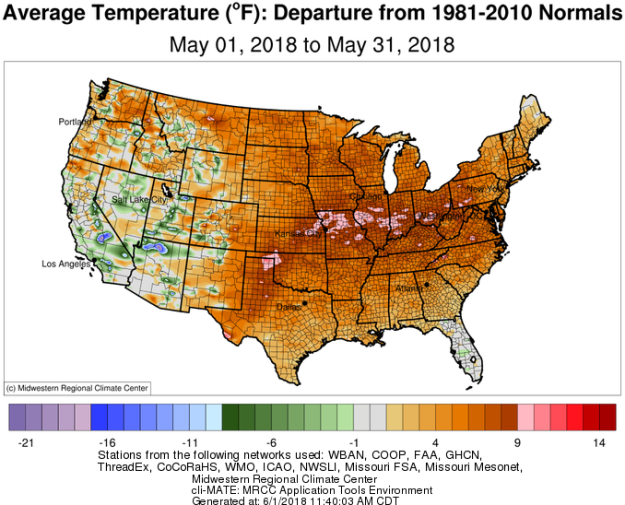 Precipitation: Based on preliminary data, the statewide average precipitation for Illinois in May was 3.98 inches, 0.62 inches below normal. Here are the monthly totals and departures from normal maps for Illinois. Click to enlarge. Areas in northern and southwestern Illinois received sizable rainfall amounts. Meanwhile, a few spots in east-central and southeastern Illinois were well below normal, and a cause for concern as we move into the summer months. The highest monthly total reported in the state was at Barrington (Cook County) with 12.69 inches. On the other hand, Effingham reported one of the lower totals in the state with 1.11 inches. 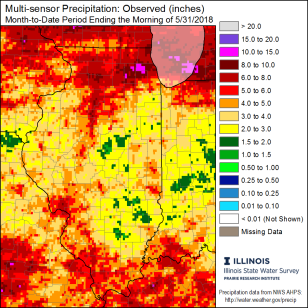 One of the key rainfall producing systems in Illinois in May was when the remains of Subtropical Storm Alberto tracked up the IL-IN  border. As noted in a previous post, the remains of tropical storms have reached Illinois in the past. 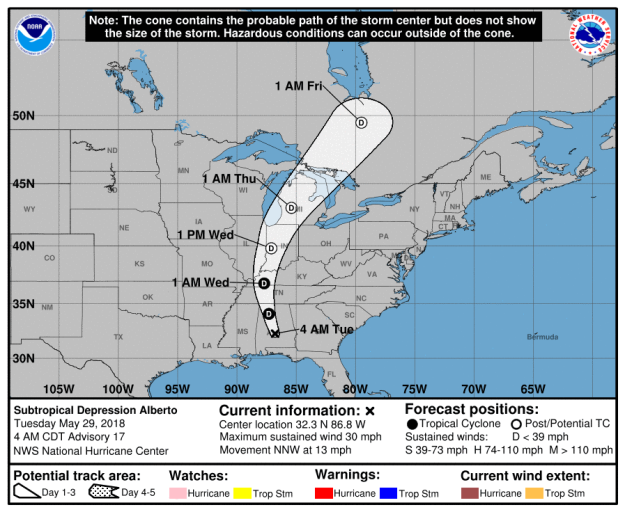 Forecast: The National Weather Service’s Climate Prediction Center released their updated outlook for June. For Illinois, we have a greater chance of seeing the above-normal temperatures continue in June. The area around Chicago has an increased chance of below-normal rainfall, which may be welcome after the wet May. The 6-10 and 8-14 days forecasts are showing Illinois with an increased chance of both warmer and drier than normal conditions for the first half of June.