Skip to content
HomeSeptember So Far – Warm and Rainy

Below are maps of the rainfall across the Midwest for September. The left panel is the actual rainfall, the right panel is the departure from normal. Rains have been widespread across the Midwest in September and generally near to above normal across much of MN, IA, MO, WI, IL, and IN. Meanwhile, MI, OH, and KY were mostly below normal. On closer examination, central and southern Illinois were near to above normal while northern Illinois has been a little drier.

The heaviest rains of 5 or more inches have occurred in two blue blobs (left panel): one blog from Kansas through southwestern Illinois; and another blob from NE and SD, eastward through IA, MN, and WI. The heavy rains in IA, MN, and WI may cause minor to moderate flooding in the next several days along the Mississippi River above St. Louis. 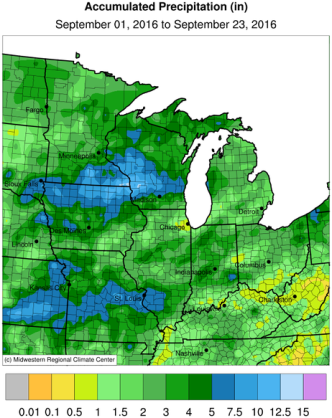 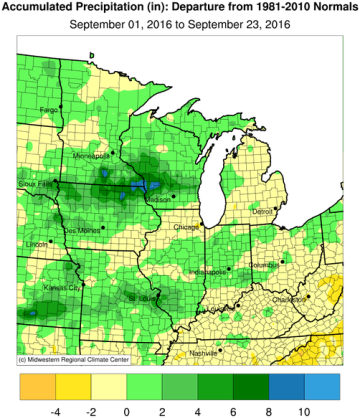 Everything is pumpkin spice these days, including the shading on the temperature departure map below. Illinois and the Midwest were much warmer than normal for the month. The two lightest shades of pumpkin spice are 1 to 3 degrees above normal, while the darker shades common across Illinois were 3 to 5 degrees above normal. The unseasonably warm temperatures are likely to end by Monday after the next major system passes through Illinois on Sunday. 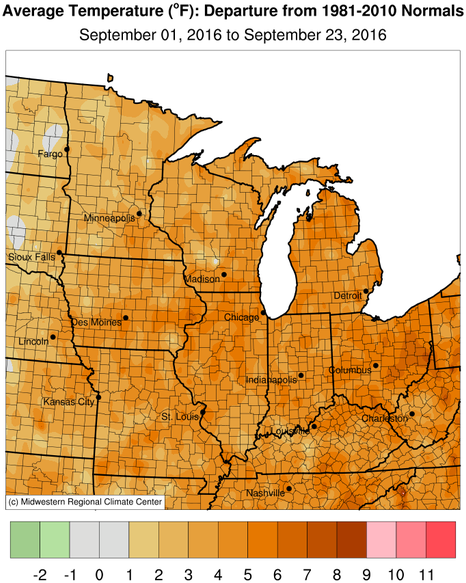