Summary: Rapid drying has occurred across the central Corn Belt since June 1 as virtually no rain has fallen, including most of central and northern Illinois. In addition, high water demand on soils has caused soil moisture to steadily drop in sites across Illinois. Estimates at one location in central Illinois put the water loss from evaporation in the soils and transpiration from plants at 2.4 inches since June 1.

When we get this short-term combination of little rain, high temperatures, and high evapotranspiration rates in summer months, we call it a “flash drought” because conditions can deteriorate rapidly such as they did in the 2012 drought. In my opinion, we are not quite there yet, but we could be if this continues for another few weeks.

Rainfall: Here is the map showing the dryness across the central Corn Belt since June 1. The area shaded gray has had almost no rain at all. Areas in orange have received 0.1 inches or less.

END_OF_DOCUMENT_TOKEN_TO_BE_REPLACED

The US Drought Monitor introduced their D0 “abnormally dry” category across northern and western Illinois (first map). Should we be worried? We have been running about 2 to 4 inches below average on precipitation this winter (second map) – that’s both rainfall and the water content of any snow. The good news is that the demand for water is very low in winter. Therefore, the impacts on soil moisture, stream flows, and lake levels so far have been minimal.

END_OF_DOCUMENT_TOKEN_TO_BE_REPLACED

Here are two highlights for today:

After some concerns of dryness over the last several months in parts of Illinois, the conditions across Illinois were much wetter in the last two weeks. Rainfall totals were especially heavy south of Interstate 72 and ranged from 3 to 8 inches or more (see map below).

The U.S. Drought Monitor has removed all areas of drought in Illinois and greatly reduced the region of “abnormally dry” conditions. 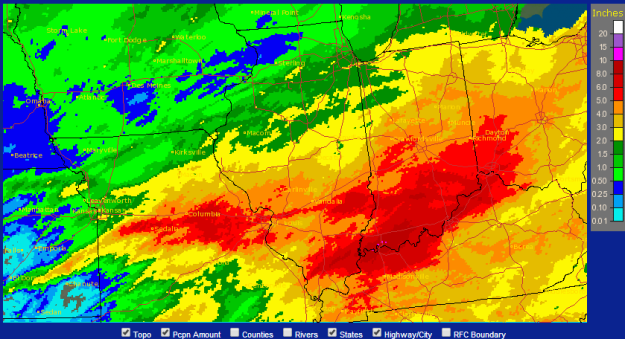 While ENSO-neutral is favored for Northern Hemisphere spring, the chances of El Niño increase during the remainder of the year, exceeding 50% by summer.

This reflects a slightly stronger chance of El Niño arriving this summer than mentioned in their post a month ago. However, they caution that there is still a great deal of uncertainty in the timing and strength of the El Niño and recognize that the skill in forecasting El Niño this early in spring is low. This is a less certain forecast than the one issued by the Australian Bureau of Meteorology earlier this week, indicating that there was a greater than 70 percent of an El Niño event by June.

The US Drought Monitor shows that drought is easing up in Illinois thanks to rains (and a little snow) in recent weeks. There are still some lingering concerns in far western Illinois and east-central Illinois. I expect that we will continue to recover with each new weather system (rain this weekend). With the growing season ending in Illinois, the demands on soil moisture will be greatly diminished. Until the ground freezes, any precipitation that falls has a good chance of soaking in and staying there.

The US Drought Monitor released their map this week showing improvements across Illinois. Between the rains of the last few weeks, lower temperatures, and the fall harvest, soil moisture and stream flows across the state have improved substantially. In fact, I would say that the situation in Illinois is even better than what is depicted on their map.

In the last 30 days, large areas of the state received 3 to 6 inches of precipitation. Even the areas shade in dark blue got 2 to 3 inches. With the low demand on soil moisture, most of that precipitation soaked in and stayed there. You can look at our network of soil moisture measurements across the state here.

There are two areas still showing signs of the flash drought earlier this year – around the Quad Cities and east-central Illinois. They are marked as severe drought (dark brown) on the US Drought Monitor map but I would classify them as moderate.

The only water supply issue at the moment is that Decatur was asked for volunteer water restrictions due to the low levels of Lake Decatur. Conditions in the rest of the state are within the normal range for this time of year, according to the USGS 7-day average stream flow. The areas circled show lingering low flows for this time of year. 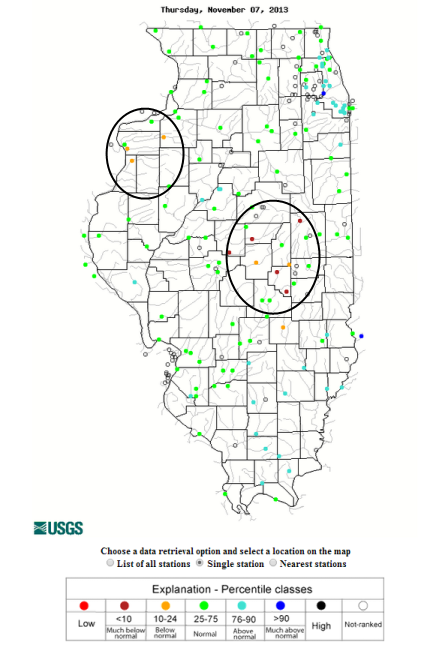